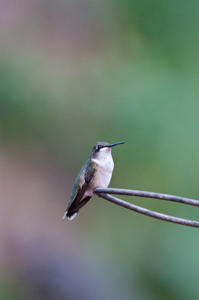 A streamlined body shape and a lightweight skeleton composed of hollow bones minimize air resistance and reduce the amount of energy necessary to become and remain airborne. Well-developed pectoral muscles, which are attached to a uniquely avian structure called the furculum, power the flapping motion of the wings. The long feathers of the wings act as airfoils which help generate the lift necessary for flight.

Birds have a large, four-chambered heart which proportionately weighs 6 times more than a human heart. This, combined with a rapid heartbeat (the resting heart rate of a small songbird is about 500 beats per minute; that of a hummingbird is about 1,000 beats per minute) satisfies the rigorous metabolic demands of flight. Unlike mammalian or reptilian lungs, the lungs of birds remain inflated at all times, with the air sacs acting as bellows to provide the lungs with a constant supply of fresh air.

How high do birds fly?

Flight affords mobility and has made possible the evolution of avian migration as a means of access to distant food resources. It also means avoiding the physiological stress associated with cold weather. Variations in the patterns of migration are numerous. Some species move only a few kilometers up and down mountain slopes. Others will travel hundreds or even thousands of kilometers, some over vast bodies of water or tracts of inhospitable terrain.

The Arctic Tern makes an annual round-trip of about 30,000 kilometers from the Arctic breeding grounds to Antarctic seas.

According to the Smithsonian Migratory Bird Center, a Blackpoll Warbler could boast of getting 720,000 miles to the gallon if it were burning gasoline instead of reserves of body fat.

The tiny Ruby-throated Hummingbird, weighing only about as much as a penny, makes the 1,000 km, 24-hour spring flight across the Gulf of Mexico from the Yucatán Peninsula to the southern coast of the United States.

Death during migration takes a heavy toll. It is estimated that half of all migrants heading south for the winter will not return to breed in the spring.

Predation and bad weather are two natural causes of mortality during migration.

Collisions with tall buildings, windows, and other structures, being shot or trapped by hunters, and getting struck by automobiles are a few of the numerous human-made dangers. Unfortunately, many birds cannot distinguish the difference between real sky and a reflection of the sky in a window.

Dr. Dan Klem of Muhlenberg College estimates that each year, in the United States alone, during migration 98 to 976 million birds fly full tilt into windows and are fatally injured.

Dr. Klem says we can minimize these collisions by breaking up the reflection on the outside of the window with a non-reflective window coating, window screens, flash tape and bird netting.

Planting trees and installing window awnings to block the sun from hitting the window may eliminate some reflection. Putting a bird feeder on or within a few feet of a window helps to slow birds down and lessen the effect of impact.

The continued loss and degradation of stopover habitat, however, is potentially the greatest threat of all.

A migrating bird faced with the dilemma of a stopover site having disappeared may not have any viable options. Without places along the way that provide an adequate food supply for the quick replenishment of fat reserves, shelter from predators, and water, these birds are probably not going to make it.

Declines in the numbers of many Neo-tropical migratory bird species have been detected over the past several decades. There are two main causes: fragmentation of breeding habitat and destruction of tropical forests on the wintering grounds.

As the birds move north in waves, they fan out across the eastern North America, feeding on the all-you-can-eat buffet of insects that hatch out in the spring. This broad-front movement pattern means that songbird stopover sites are widely dispersed across the wooded areas in the spring.

For those birds heading south in the fall across the Gulf of Mexico, the Gulf coast is an important area for stopovers.

In the fall, higher elevation sites–especially mountain meadows–become important because of the abundant populations of insects that peak late in the season. Also in the fall, at lower elevations, foothill riparian areas (rivers, streams and creeks) provide important fruit bearing plants for birds such as tanagers and grosbeaks.

Loss and degradation of stopover habitat not only can result in more birds dying while on migration, but it can also have serious repercussions in terms of nesting success. For example, birds heading north are already constrained by the relatively short amount of time available to get to the breeding grounds, establish a territory, pair with a mate, and get on with the further demands of raising young. Late arrival, or arrival in poor condition, on the breeding grounds because of inadequate food and rest en route, is likely to jeopardize a bird’s ability to reproduce.

The health of temperate and tropical ecosystems is bound together by the migration of billions of birds each year–and shaded coffee plantations play a key role. This form of land use may itself be on the way to becoming an endangered species.

You can create and restore habitat at home, at your workplace and in your local park or wildlife refuge. You can make any property attractive to birds by offering water, shelter, food and nesting habitat.

Some points to help birds